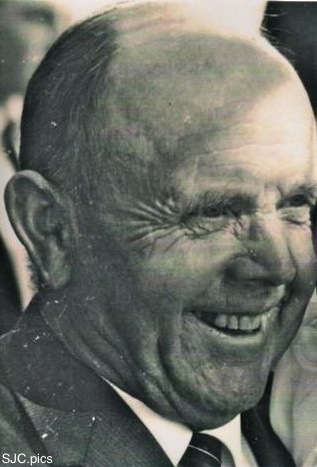 George Wareham, butcher, married Clara Bishop and produced eleven children. The older children helped run the pork butcher shop they owned in Southampton. George died in 1887 and Clara remarried Frederick Charles Bird in 1894. George and Clara’s youngest daughter Florence (born 1881) had gone in to service at an early age and in 1903 had a son Frederick Charles who was brought up by his grandparents as their own child. After Frederick Charles Bird died in 1910, Fred returned to live with his mother.

In 1905 Florence married Ernest Albert Cole who worked on the Southampton Docks and also as a ship’s steward. By 1910 Florence and Ernest had produced three 3 children. When Fred returned to his mother, he got on well with his stepfather who was a kindly man. More children were born to the family.

After WW1 Fred worked with his stepfather on the docks in Southampton. Fred was ambitious and because of his small size there was discussion about him becoming a jockey. Eventually he enrolled in a Salvation Army Training Scheme to bring agricultural workers to Australia. He did his training at Winchester and emigrated from London to Melbourne in 1923.

The first winter he worked on a dairy farm in Gippsland and the supplied accommodation was a tent. Fred worked on farms and learnt to lay bricks and had the ambition to be a millionaire by the time he was 30. On a trip to Sydney for a building job in 1925 he met Elsie but her mother didn’t approve of him. In fact she threw a tin of paint at him. It didn’t get him but it ruined his hat. Fred went back to Victoria and they corresponded for the next six years before they married. Fred and Elsie bought an apple orchard at Arthur’s Creek.

Three babies arrived and they loved the farm. When Margaret was 4 it was decided to move to Lane Cove as her maternal grandmother was widowed for the second time and living alone in a large house. The Warehams added two more children to the house making eight in all. Fred went back to bricklaying and carpentering until he joined the army he served in two units first as a chauffer for officers stationed at Victoria Barracks and then as a carpenter on the Floating Workshops in the Pacific. After the war he became a travelling foreman for Paynter and Dixons and built many large buildings in Sydney, Melbourne and Brisbane. Fred was supposed to have retired at 65 years of age but in fact he worked until the last year of his life when at 71 he died of lung cancer contracted from his building work and living during the war on an asbestos-lined ship. He never did become a millionaire — the problem was he could spend money as fast as he earnt it. His estate was $11,000.

Grandma in England with children. About 1910.Fred is the eldest boy. 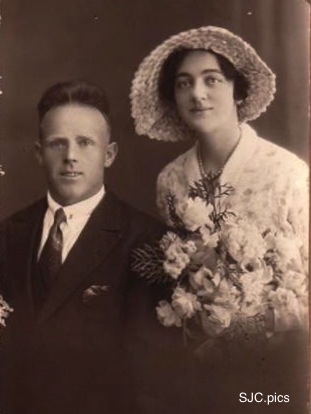 Wedding of Elsie and Fred.