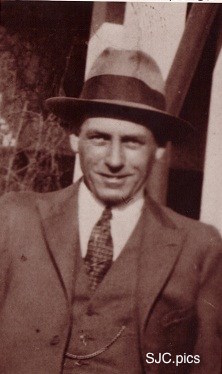 In 1920, the Moulders were living in Undercliffe. The rear boundary of their block was Cook’s river. We used to fish for eels, which were rather plentiful, and surprisingly good to eat. Uncle Charlie was a bit of a naturalist. He had an aviary of birds, and lots of chooks. He had an incubator, and raised his own chickens. To see a chick crack the shell and emerge from the egg, was a common sight, as was a mass of fluffy little yellow balls running around in their heated pens, chirping. The boys, Randolph and Ted, had trays of birds’ eggs of various kinds nestling in rows, set in pollard. Another passion of Uncle C’s was anything mechanical. He had served his time with H V McKay, the farm machinery people, whose Sydney headquarters were at that time in King St, Newtown.

My father seemed to get on well with Uncle Charlie, and they were often to be seen with their heads together under the bonnet of a car. In fact, at that stage, Uncle C owned a garage on the corner of Homer St and our street. John Howard’s father owned a garage in Earlwood, and I often wonder if it was the same one. My father had a T model Ford panel van then, and Uncle C had an up-market French car called Delage. I remember piling into this car to go into the city to try and see the Prince of Wales when he visited us. There were no such things as seat belts of course, and no limit on how many passengers. The adults sat on the seats, and the kids either on their knees or else on the floor.

Edward, the prince, kindly gave us school kids a day off, his message being famous for the way he spelt holiday with two l’s. One had to be crossed out! Edward, and his cousin, Lord Mountbatten, who was with him, were about 19 or 20 years old. They arrived here in HMS Hood, a full battleship, the pride of Britain. How much did that cost? Maybe it was their way of thanking Aust for their help in the war. Royalty in those days were like gods. Even in 1953, when the present queen visited, do you remember the fuss? People standing 10 deep in the rain for hours to try and get a glimpse of her as she sped by. How have the mighty fallen!

Uncle C was an all-rounder. He loved music, and had the best available on his gramophone. I am sure, if he were alive today, he would be into the internet in a big way. He was into everything. A real entrepreneur too. He organized a carnival at the bridge across the river once. I remember a pole sticking out over the water, greased with animal fat. The notice said, if anyone could walk to the end without falling off, he would get a prize — “A real live pig.” Do you know what it was? One of his guinea pigs!

Another side-show was a two shilling piece in a tub of water, which you could have if you could get it out. He had rigged up a magneto operated by turning a handle, which produced such a high-tension current through the water that it paralysed your hand.

He lived life to the full. Was never still. Always enthusiastic about something. Do you remember visiting them at Toowoomba where they had a garage in the 1950s?

He and Auntie Ollie finished up in quiet retirement on the central coast and both lived into their 80s.

Moulders as convicts   Go to Index of Names