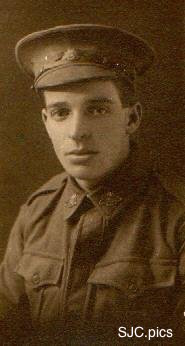 From the Australian Army Records we glean that:

Private Sidney Harold Lister, Regimental no. 7069, was part of the 21st Reinforcement for the 17th Battalion [Australia was required by the Imperial General Staff to furnish 16,500 fresh troops each month, which was why Prime Minister Billy Hughes was pushing for conscription for overseas service]. He enlisted on 27 July 1917, was passed by the Medical Officer and arrived in camp on 10 August. On 29 August, he signed his Last Will and Testament, leaving the whole of my Property and Effects to my mother Mrs Emily Australia Lister. On 31 October 1917, Sid was embarked at Sydney on HMAT A14 Euripides, a transport ship requisitioned by the Australian government, fitted out to carry 136 officers, 2204 other ranks and 20 horses. After a voyage of almost two months, he disembarked on 26 December 1917 at Devonport (Plymouth), England. This is where his Lister grandparents had last set foot on English soil on 19 April 1838, nearly 80 years before. The next day he arrived at Fovant, and four months later, on 1 April 1918, was transported to France, marching into No. 1 Overflow Camp, probably near Le Havre in Normandy, that same day. From here, on 9 April, he marched out to his unit (Beaumarais??) and was taken on strength a week later on Tuesday 16 April. He was killed in action four weeks later on Tuesday 14 May.

His Effects received from the field on 28 June 1918 by the AIF Kit Store in London were contained in a sealed parcel: Wallet, Photos, Cards, 2 Testaments, Diary, Metal Mirror, Small Religious Book. These items were sent on from Victoria Barracks, Melbourne, and Sid’s mother signed the receipt for them on 20 February 1919. She also signed for one Memorial Scroll and King’s Message on 8 August 1921. This signature reads E.A. Lister for T.S. Lister (her husband had died on 8 May 1920), and is accompanied by a note explaining her current address is Unwin’s Bridge Road, Undercliffe (her daughter Dot’s address).

Sid’s mother completed a form for the Roll of Honour (William Lionel George was also a private in 17th Battalion who returned to Australia on 9 Mar 1919 and died 21 Nov 1979. He was a farmer who enlisted the day after Sid.) and received a Memorial Plaque which she deputed her daughter Dot Crawshaw to collect on 3 January 1923. Finally, on 4 June 1923, she signed for one Victory Medal in connexion with the late No. 7069 Pte. S.H. Lister, 17th Battn.

The War Diary of the 17th Battalion (Extract 1; Extract 2) sheds no light on Sid's death — he is merely a statistic of the OR. 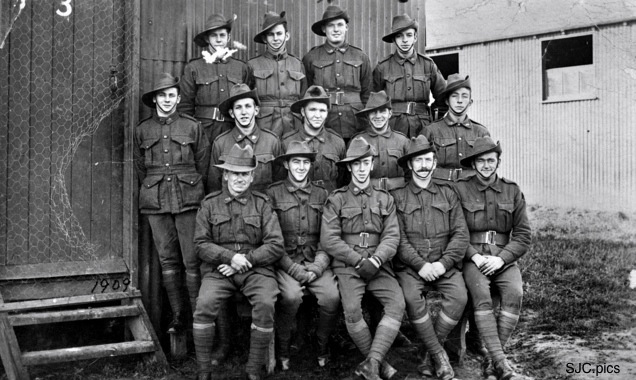 Some members of the 21st Reinforcements of the 17th Battalion, 1918.
Sid is at right-hand end of back row. William Lionel George is beside Sid. 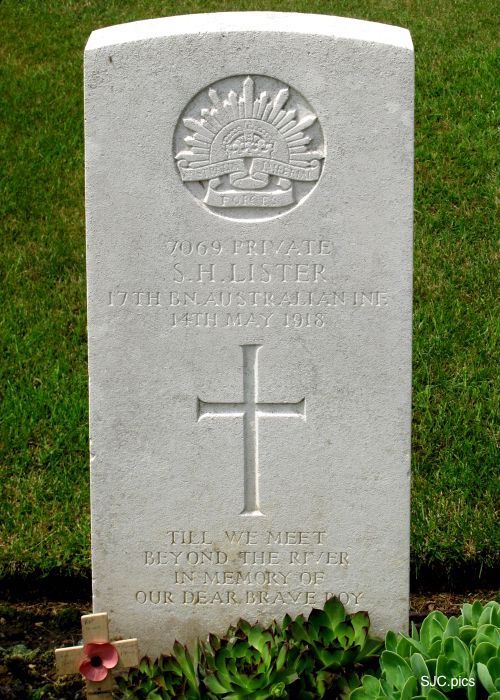