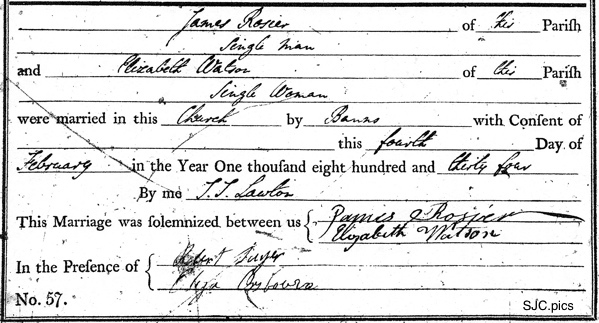 In the 1841 census, the Rosier family is to be found in Church St., Walsham le Willows, Suffolk. (This is halfway between James’s home town of Lanham and Wattisfield, where Elizabeth came from: about 3 km from each). The 29-year-old James Rosier is described as a “Gun Maker” and there is a 16-year-old apprentice living with the family: one Jeremiah Orams, who is probably the son of Edward Orams of Stowmarket, Ironmonger.

James was described in March 1842 as watchmaker, Pilcroft Street [Bedford], and in 1844 as watchmaker, Castle Lane. James Rosier, gunmaker, Offa Street, listed in 1847 directory. Also described as gunsmith, Offa Street, when his daughter Ann was admitted to school in September 1847. He is listed in Gunmakers of England and Wales as in Offa St, Bedford for years 1846-1848. On 1 September 1849 James Rosier, gunmaker, Offa Street, placed an advertisement in the Bedford Times stating that he had disposed of his business to Henry Adkin. 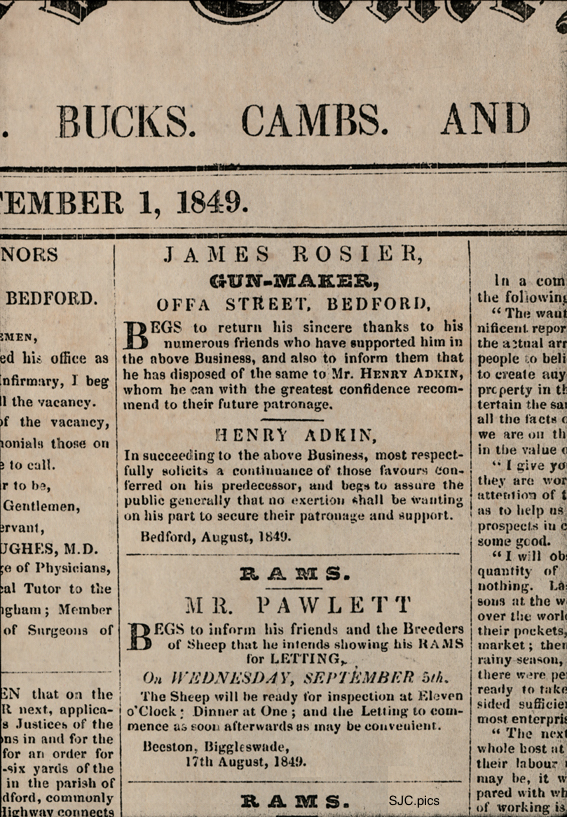 The amount in question seems to have been one shilling, and while James Rosier signed, Edward Finter (presumably Jemima's father) marked his name with an X.

Other records of the time indicate that one shilling per week is a likely figure.

Humphrey Peers is listed as Butcher in High St, Bedford, in both the 1823 and 1844 directories. He arrived in Australia in 1848 and was a good friend of James Rosier back in Bedford, hence their commercial dealings in Australia.

In 1850 James Rosier bought 265 acres of land at Diamond Creek with Humphrey Peers. Peers and Rosier transferred their land to Dr John Blakemore Phipps in the 1850s. A gold rush began in Diamond Creek in 1862 with Phipps closely involved. Unfortunately, James pére died from tuberculosis in 1852 and his wife, Elizabeth, and two sons, Thomas and George (JWR’s brothers) followed soon after in the late 1850s.

It seems James Rosier purchased his 265 acres with money lent from Peers, while Peers acquired his block with money from John Blakemore Phipps, also formerly of Bedford, UK. Upon Rosier's death in 1852, he willed his 265 to Peers, and Peers subsequently transferred his now larger allotment of Portions 1 and 2, Parish of Nillumbik, to Phipps in 1855, receiving back a smaller block of 50 acres as part of the deal. It's likely this was the intent all along; that Phipps was the behind-the-scenes financier, probably due to limitations on how much land one individual could purchase. 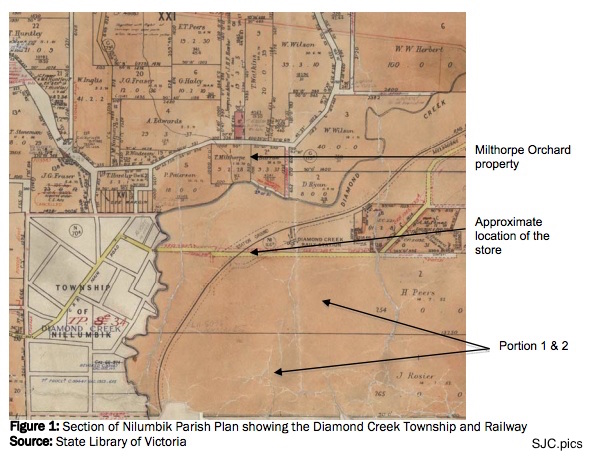