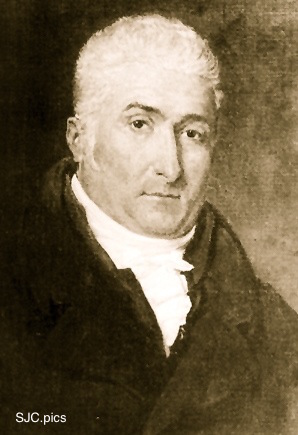 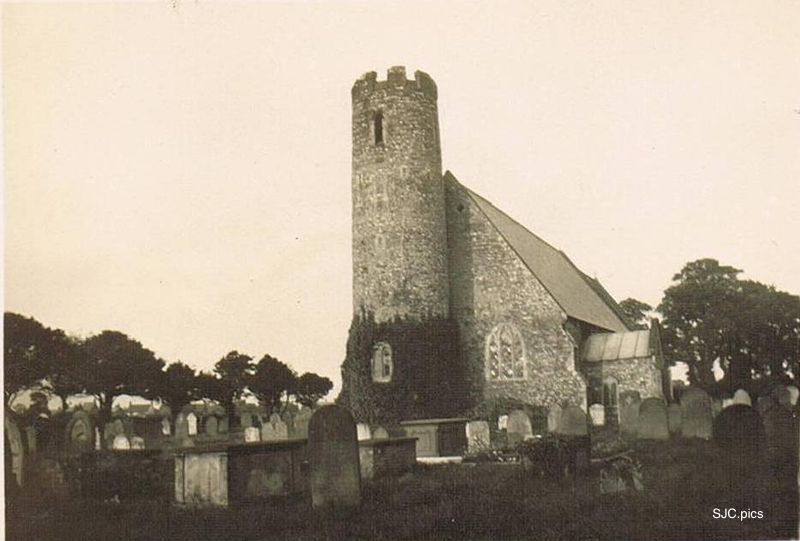 Robert Browne of the Parish of Blundeston single man and Sarah Thurtell of this parish single woman were married in this Church by Licence this 25th day of Septr 1787. Signed Robert Browne, Sarah Thurtell. Witnesses Elizabeth Colver and Eliza(be)th Thurtell.

So it seems they were married on the same day in two different parishes. They may well have had a triple wedding breakfast somewhere in Blundeston.

After their marriage, John and Anne Thurtell lived in Hopton for 15 years, perhaps at Hopton Hall or a nearby farm. At this time, John Thurtell was at loggerheads with Rev. Norton Nicholls over the payment of his tithes: see letter of 24 Nov 1803 regarding a false receipt. Nicholls made a note to himself that he had not replied other than to send a corrected receipt.

The family moved from the Parish of Hopton to Hobland Hall Farm in the Parish of Bradwell on 6 April 1804. (See letter of 02 Apr 1804 asking the Rector what he wanted done with the Hopton parish records.) The clashes with Rev. Nicholls over tithes continued (see letter of 29 Oct 1804 on the subject of turnips). From correspondence held by Yale University Library we learn that John’s brother Thomas, later Mayor of Norwich and father of the murderer, also repeatedly quarrelled with Rev. Nicholls.

In 1823, the John Thurtell family moved (back?) to Hopton Hall, less than one mile away from Hobland Hall. In that year Hobland Hall and other extensive properties belonging to John Thurkell (Thurtell), a bankrupt, were sold by auction in Yarmouth as announced in the local newspaper. The Ipswich Journal of 11 and 26 July 1823 has advertisements for sale of this manor at the Bear Inn, Yarmouth, 9th August 1823, by order of the assignees of the estate of John Thurtell, a bankrupt, of the Equity of Redemption of Estates situated at Bradwell, Hopton, Belton, etc. of the sites of the Manors of Hobland and Hopton, also a mansion house called Hobland Hall, several farms, etc., containing about 630 acres.

Either John Thurtell avoided total ruin, or possibly Hopton Hall where he afterwards lived was by then the property of his eldest son, John Jr. This was the time of an unprecedented number of bankruptcies in England. Indeed, these must have been grim times for the family, for 1823-4 was also the time of the Thurtell murder scandal.

By 1842 John Thurtell was living just outside Norwich, as early in that year his granddaughter Elizabeth Anne Thurtell wrote to her cousin Edward Brookes Thurtell that Grandfather still is declining and will not so he thinks be long spared, but he walks into the City twice a day, and is in his 80th year. Despite his pessimism, he lived for another four years, dying in Willow Lane, St Giles, Norwich on 10 Sep 1846 and being buried beside his wife in the Thurtell vault in Blundeston church. 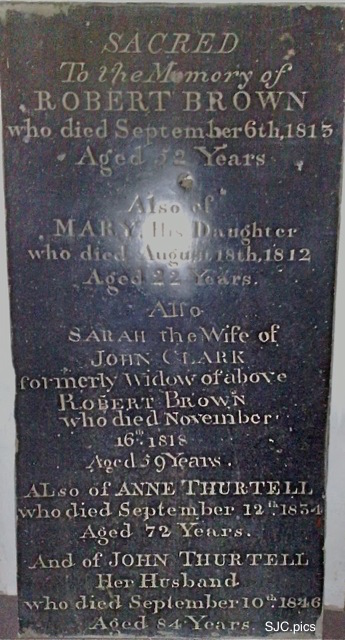 John and Anne Browne Thurtell had twelve children who survived childhood. All twelve were believed to have been born at Hobland Hall, Bradwell Parish, and christened in the Church of St. Mary the Virgin, Blundeston. However, contemporary records of baptisms in the parish of Hopton have now been found for all but one of the children, and in some instances the birthplace too is given as Hopton. They may still have been baptised in Blundeston. Norton Nicholls, Rector of Bradwell, seems to have been responsible also for Hopton (John Thurtell certainly asked him what he wanted done with the Hopton Poor Records when John moved to Bradwell). It is possible that he baptised the children in Blundeston, which was more convenient for him since he lived there, but put the baptisms in the Hopton Parish Record because their parents lived in Hopton. The youngest son, Alexander, was born in Bradwell in 1805, so perhaps by then they were living at Hobland Hall (see above).

The only one of these children who lived in the area for any length of time was John, the eldest, some of whose children were baptised in Hopton, but he died in Great Yarmouth. Benjamin was married in Hopton. John’s brother George’s son, George Jr, died in Lound, but is buried in Blundeston, as are John and Anne.